Svetlana Zakharova and the Bolshoi Theatre. MODANSE: “Like a Breath” and “Gabrielle Chanel” 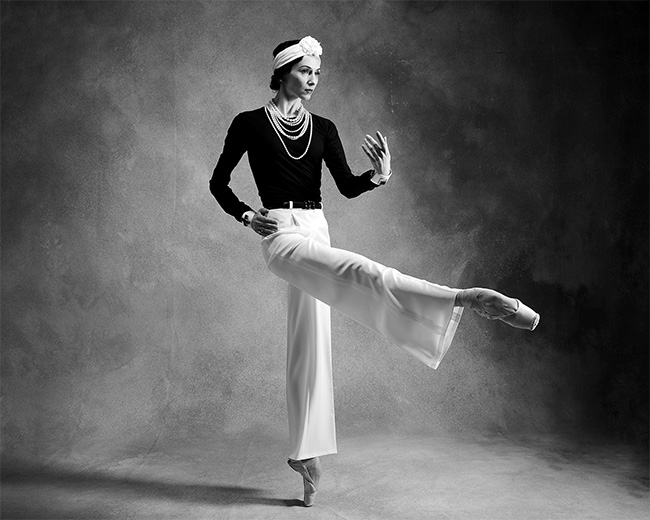 Svetlana Zakharova and the Bolshoi Theatre

Come un Respiro, choreographed by Mauro Bigonzetti, made its debut in 2009. The new interpretation is a one-act version and will be performed by the company with Zakharova and Jacopo Tissi in the lead roles. The music is Handel: Suites for Keyboard, the costumes – designed by Helena de Medeiros – are stylish and vibrant while the choreography is a modern reflection of the aesthetics of the Baroque period.

Breathing penetrates Handel’s music and passes through it. It captures and draws us into a whirlpool, which seems to convey the echo of endless spaces. A body free from excesses builds its geometry in the physical space, striving to merge with this breathing, which is indistinguishable from inspiration.

Bigonzetti is a master of pose with a very subtle sense of elegance. He builds his choreography like a sculptor. Gracefully and smoothly, as if gliding on stage, the dancers gather in groups, performing their pas de deux or solos.

The UK premiere of Gabrielle Chanel forms the second part of the programme in which composer Ilya Demutsky, choreographer Yuri Posokhov, and director and librettist Alexei Frandetti have created a vivid saga about the life and work of global fashion legend, Coco Chanel. The result of this collaboration is a work of art; a tribute to Chanel’s history-making talent and her independent personality. Gabrielle Chanel follows the journey of the famous couturière in several tableaux: her debut as a young cabaret singer, her early successes, her connection with and subsequent designs for Ballets Russes, her friendship with Sergei Diaghilev, and her relationship with the English polo player Captain Arthur Edward ‘Boy’ Capel.

Finding a character is a very personal thing, invisible to outsiders’ eyes. The first time I got that feeling was in Paris during a photo shoot. They did my makeup, my hair – and I saw Chanel in the mirror.

“Svetlana Zakharova is widely considered to be one of the greatest ballerinas of the 21st century. Her sheer talent, her constant search
for new inspirations in art and performance and her critically acclaimed performances have engendered worldwide respect, admiration and loyalty. At MuzArts we wanted to come up with something extraordinary and new for a ballerina of her stature and to surround her with talented and brilliant people – each of whom excels in his or her own genre.”

Graduated from the Ballet School the Teatro dell’Opera di Roma and joined the ballet company of the same opera theatre in 1979. In 1983, he joined the modern dance company Aterballetto and danced in the ballets choreographed by William Forsythe, George Balanchine, Léonide Massine, and others. In 1990, the brilliant danseur Mauro Bigonzetti made his debut as a choreographer and, thanks to his talent, incredible efficiency and collaboration with the famous theatres, he became the major Italian choreographer of the modern ballet world. Bigonzetti’s dance is eroticism that comes to the fore, but never transcends the boundaries established by the ballet tradition. His performances have been staged by many ballet companies of the world, including La Scala, English National Ballet, Ballet National de Marseille, New York City Ballet, the Royal Swedish Ballet, and others.

Graduated from the Glinka Choral School and the St. Petersburg Conservatory as a choral conductor. As a participant of the Fulbright Scholar Program, Ilya received a master’s degree in composition from the San Francisco Conservatory of Music. He has written vocal, choral, chamber, and symphonic works, the operas New Jerusalem and Black Square, the ballets A Hero of Our Time and Nureyev (choreographer Yuri Possokhov, director Kirill Serebrennikov), Optimistic Tragedy, and Anna Karenina (choreographer Yuri Possokhov). He composed music for the opening ceremony of the 2014 Paralympic Games in Sochi and the film Rings of the World, an official documentary about the Sochi Olympics (directed by Sergei Miroshnichenko). Among his works for drama theatre are Kirill Serebrennikov’s productions The Student, Who Is Happy in Russia, and Outside (for the 2019 Avignon Theatre Festival). Ilya wrote the score for Kirill Serebrennikov’s film The Student, for which the European Film Academy named him Best Composer in 2016. Ilya received the first prize of the International Composing Competition “2 Agosto” in Bologna in 2013, the medal of the President of the Italian Republic Giorgio Napolitano, the highest national theatre award Golden Mask, the Benois de la Danse award, and others.

Born in Lugansk, Ukraine, and raised in Moscow. In 1982, after graduating from the Moscow Choreographic School, where Yuri studied under the guidance of the outstanding teacher Pyotr Pestov, he joined the Bolshoi ballet company. Yuri danced the major parts in classical and modern ballets for ten years with renowned ballerinas such as Semenyaka, Bessmertnova, Ananiashvili, Terekhova, Stepanenko, and Pavlova. In 1992, he signed a contract with the Royal Danish Ballet. Yuri became a Principal dancer dancer of San Francisco Ballet in 1994. He has been active as a choreographer since the late 1990s. He has created more than forty ballets for various ballet companies of the world. Yuri Possokhov is one of the best choreographers of our time, carrying on the traditions of Russian classical ballet and enriching them with bold elements of the modern dance style. Yuri is a two-time Golden Mask and Benois de la Danse winner for his choreography in the ballets A Hero of Our Time and Nureyev.